The Patriots Put A Lot Of Energy Into Conserving It

To avoid the construction and operational issues that plagued the team’s previous home, The Kraft Group had challenged their contractor to focus on long-term sustainability, energy efficiency and ecosystem management when designing Gillette Stadium.

As a result, The Kraft Group was able to develop a facility that is sustainable both in its construction and its day-to-day operation.

From its inception, the designers focused on key areas that would yield environmental benefits and cost savings.

Timing devices installed on the electrical distribution system enabled all non-essential lighting after hours to be automatically shut down. This attention to energy use at the design stage reduced consumption and associated financial costs, as well as related carbon emissions.

Sustainable use of wastewater

An on-site wastewater treatment facility treats the stadium’s sanitary drainage such as wastewater generated from hand washing, laundry and bathing. This water is then reused in thousands of toilets throughout the facility, saving millions of gallons of water annually.

Reuse of waste products during construction

During the construction of the stadium, more than 130,000 cubic yards of blasted open rock was processed through on-site crushers and reused on site. This process resulted in more than 90% of the residual product being reused as opposed to being added to the region’s diminishing landfill capacity.

Harnessing energy from the sun

The facility management team at Gillette Stadium continues to search for new ways to expand its conservation efforts and cut costs.

The patriots saved 95% vs. Paper towel costs, maintenance and waste while reducing their carbon footprint by 70%

“Installation of XLERATOR hand dryers reduces the cost and maintenance associated with paper towels in the stadium’s washrooms,” said Nolan. “Over time, we plan to install more dryers throughout our other properties, reducing operating costs and supporting our existing sustainability initiatives.”

Unlike conventional hand dryers, which average 30 to 45 seconds of drying time, XLERATOR dries hands three times faster (completely in 10 seconds) and uses 80% less energy than conventional hand dryers. XLERATOR represents a 95% cost savings when compared to paper towels, reduces the need for maintenance and improves washroom hygiene. XLERATOR is also the only hand dryer to be MADE IN USA Certified, the first hand dryer to be GreenSpec® Listed and helps facilities qualify for LEED credits.

The installation is a natural fit given XLERATOR’s proven environmental benefits and the stadium’s reputation as a leader in conservation. Nolan comments that in addition to the energy saving, “Not having to pick up excess paper towels, re-stock towel dispensers, or pay for the removal of such waste, the stadium will save thousands of dollars in operating expenses.”

To further simplify the retrofit process, Excel Dryer provided the operations team with recessed wall boxes that allowed the dryers to be mounted precisely into the space where the paper towel dispensers once were.

“The NFL currently has XLERATOR hand dryers installed at its New York headquarters, NFL Network Studios
in Los Angeles and is encouraging the use of high-speed, energy-efficient hand dryers at stadiums as part of the league’s ‘Green Initiative’,” said David Krichavsky, director of community affairs, National Football League.

“We are excited about partnering with one of the most respected organizations in professional sports,” said William Gagnon, director of marketing, Excel Dryer, Inc. “The Kraft Group has created the model franchise in the NFL; its team, operations, business, and green initiatives are a proven blueprint for success.”

With continued efforts to reduce carbon emissions and save energy, the Patriots and Gillette Stadium are well on their way to creating a ‘green dynasty’. 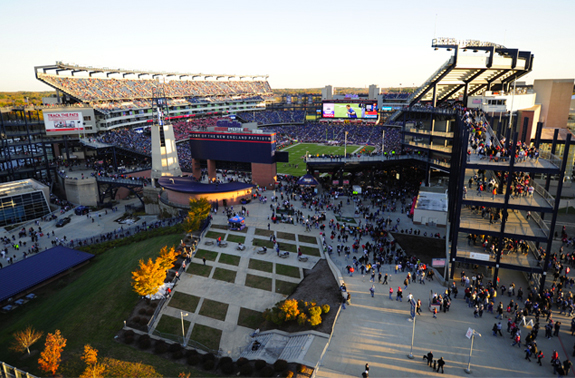 "Updating the washrooms with XLERATOR® hand dryers represents another large step in reducing our carbon footprint."

P Of Operations At Gillette Stadium

Located just southwest of downtown Boston, Gillette Stadium is home to one of the world’s most revered sports teams, the New England Patriots. Since Robert Kraft purchased the franchise in 1994, no NFL team has won more games than the Patriots. Between 2001 and 2004, the Patriots became just the second team in NFL history to win three Super Bowls in four years.

How to choose a sustainable energy efficient hand drying solution for large venues?